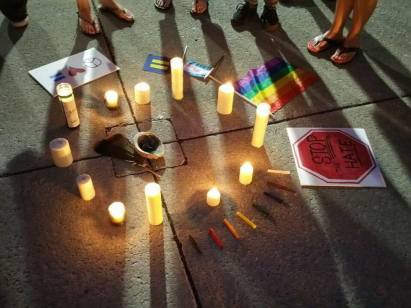 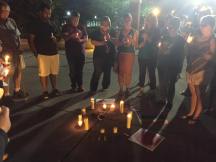 On Sunday, June 12th, 2016, a man entered Pulse, a popular gay nightclub in Orlando, Florida, and opened up fire with an AR 15.  This attack resulted in fifty-three injured and forty-nine deaths, making it the most tragic event since 9/11, the deadliest mass shooting in US history, killing more people than the Columbine and VA Tech massacres combined.

Last night, Tuesday the 14th, the city of Tiffin held a small service for the attack at the All Patriots Memorial.  Mayor Montz, in addition to two other prominent city leaders, gave speeches and laments for the attacks before opening up to the public for comments, where approximately five or six citizens of Tiffin stepped forward to show their grief and support.  Attendance is estimated at over one-hundred people.  Tiffin may be small and not the most accepting community, but their love and support was felt last night.

At 9:30, after the city’s vigil, I planned and held a vigil on Tiffin University’s campus with the help of Susan Ross-La Torre, director of student activities, and Jacob Simon, assistant director of residence life.  Gathered in TU’s courtyard, about thirty of us stood in the rain with candles.  Poems were read, prayers were prayed, and proclamations of grief were expressed.

Our Pax Christi group here at the sisters of St. Francis is starting a new book.

The book, Between the World and Me by Ta-Nehisi Coates, is written as a father speaking to his son.  It focuses on the way that African Americans are treated by law enforcement and the gross over-incarceration rates among African Americans.

Toni Morrison, renowned and well-respected novelist, writes of the book, “I’ve been wondering who might fill the intellectual void that plagued me after James Baldwin died.  Clearly it is Ta-Nehisi Coates.  The language of Between the World and Me, like Coates’s journey, is visceral, eloquent, and beautifully redemptive.  And its examination of the hazards and hopes of black male life is as profound as it is revelatory.  This is required reading.”

Please join us at our Pax Christi meetings and share with us this wonderful and relevant story.  Our group meets every first Thursday of each month at 7:00 pm at St. Francis Spirituality Center.  For any questions, contact Sister Paulette at (419) 447-0435 ext 136. 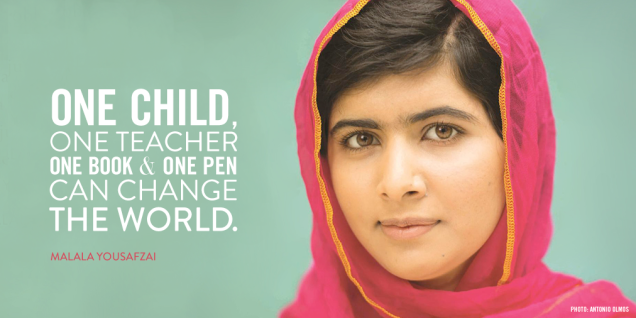 My name is Scott Williams, and I am currently working as an intern for Sister Paulette and Project Peace.  The majority of my duties here involve social media and creative assignments, but today, I wanted to share with you one of Project Peace’s bigger projects that I have been tackling lately.

Each year, Project Peace holds a booth at the Seneca County Fair, side-by-side with the Pax Christi group, another peaceful advocate here at the Sisters of St. Francis.

This year, the booth is centering around “Steps to Peace.”  My main task for the booth was to come up with an archetypal figure of peace and then create a life-sized cut-out of them.  After some deliberation, we decided on Malala Yousafzai.  For those of you who are not familiar with Malala, let me share some of her major accomplishments:

Since 2009, Malala has worked tirelessly at evening the playing field for women in education.  She wrote letters and essays for many outlets, including the BBC Urdu, usually under a pseudonym for protection.  Her efforts broke her through her first threshold in 2011 when she was awarded Pakistan’s first National Youth Peace Prize.  After this, she was nominated by Archbishop Desmond Tutu for the International Youth Peace Prize.

Unfortunately, though this was cause for celebration, these accomplishments had her marked by the Taliban and became branded for death by its leaders.

In October of 2012, the Taliban found her.  While on the bus home from school, the bus was stopped, and an armed masked man stepped onto the bus.  After the man asked for Malala by name, he shot her with just one bullet, which went through her head, shoulder, and neck.  Though she did survive, she was transported to the UK for more advanced medical treatment.

When she was released in January of 2013, the whole world was already learning about her story.  Protests littered the entire country of Pakistan, and 2 million people, moved by her story, signed a petition that led to the Pakistani government passing the Right To Free and Compulsory Education Bill.

Since then, Malala has started her own campaign which seeks to “bring awareness to the social and economic impact of girls’ education and to empower girls to raise their voices, to unlock their potential and to demand change.” She also wrote her own story in the New York Times Bestseller “I Am Malala: The Girl Who Stood Up for Education and Was Shot by the Taliban.”  In 2014, she was also awarded the Nobel Peace Prize, the youngest recipient to date.  She continues to advocate for women’s equality in education.

Read here for Malala’s full story (this site was also used to confirm the information provided above).

Because of all of her devoted work to paving the road to equality and ending the violent grasps that currently make equality difficult, she seemed a fitting role model for the children who stop by the booth this year.

The Seneca County Fair takes place July 25th-31st.  Project Peace’s “Steps to Peace” booth will be located in the Old Merchant Building.  In addition to the cut-out of Malala, the booth will also have information on Project Peace, games for the kids, and an opportunity to make peace head bands.

If you would like more information or would care to volunteer at our booth, contact Sister Paulette, coordinator of Project Peace, at (419) 447-0435 x.136.

Read here for the full article on our booth at the Seneca County.

It has been an exciting month for me here with Project Peace, and I cannot wait to see where the rest of my time here will lead me.